Fans of 'The Umbrella Academy', the comic book series turned Netflix show created by Gerard Way, will be getting a special festive treat later this year.

A one-off comic entitled 'Hazel and Cha Cha Save Christmas: Tales from the Umbrella Academy' will be released on November 20 and is co-written by Way and Scott Allie with illustrations by Tommy Lee Edwards.

The plot is set to follow "Hazel and Cha Cha--the bizarre assassins who first appear in Umbrella Academy: Dallas and blew audiences away in the Netflix series--track down a rogue time agent and cross paths with a plot to discredit Christmas!". The characters were memorably played by Cameron Britton and Mary J. Blige in the Netflix series.

Check out the issue's cover below: 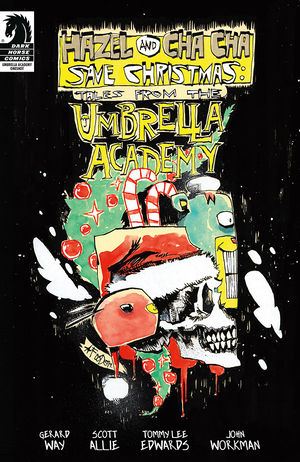 The comic will be published by Dark Horse Comics and you can get more info here.

Gerard Way recently also announced that he has begun work on volume 4 of the comic series. Season 2 of the Netflix series is also currently filming.

Check out the visual for Way's cover of 'Hazy Shade Of Winter' from the show, featuring his My Chemical Romance bandmate Ray Toro, in the video below:

Neck Deep’s ‘All Distortions Are Intentional’ Has Debuted At No.04 In The UK Albums Chart

Thousand Below Have Announced The Details Of A New Reworked EP